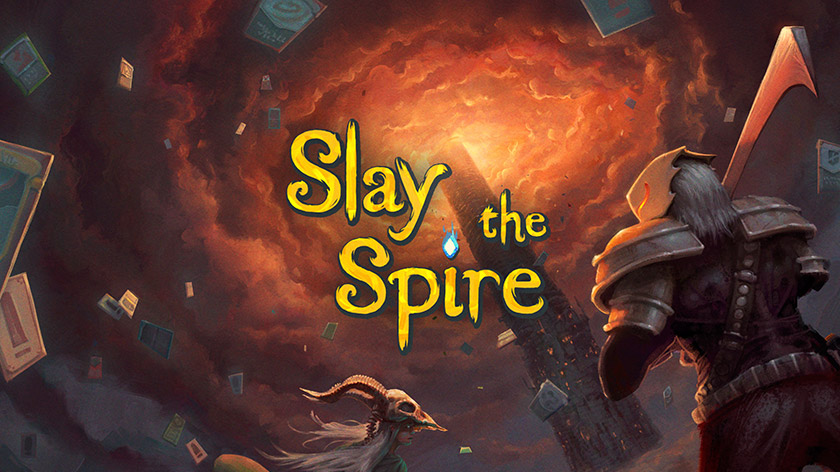 The last Early Access Roguelite I reviewed was Deadcells by French game developers Motion Twin. I was lured in by the shiny Metroidvania tags as I often am but I wasn’t even remotely disappointed. This time, I did have a bit of help by seeing imaqtpie playing it in between his League of Legends queues. Slay the Spire looked right up my alley so I it. How does it really fare without having the mans Michael Santana behind the wheel? 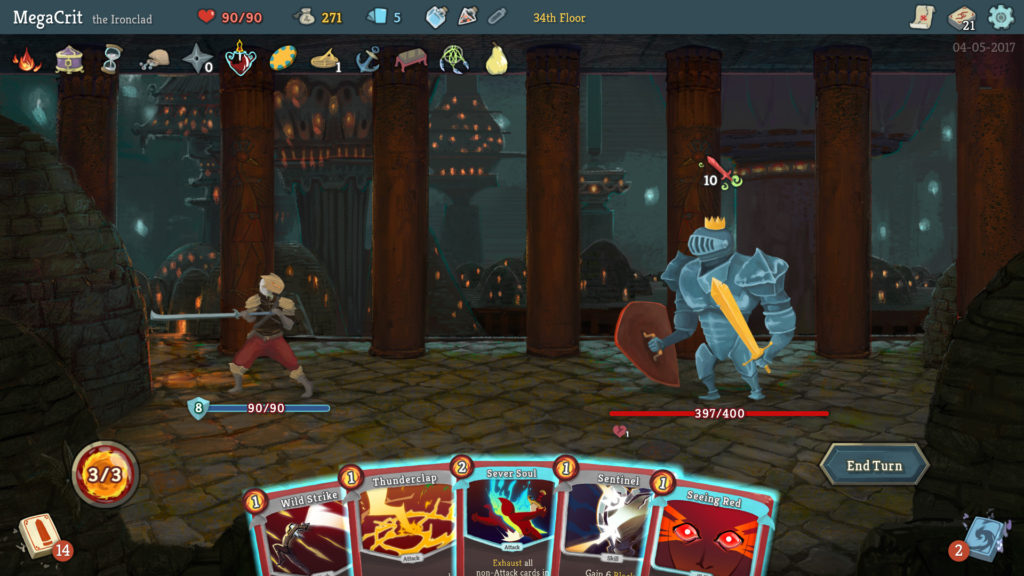 So this game is relatively straightforward. You choose a character (currently between a berseker style character or a rogue style character) and you progress through the map with events at every space varying in between monster fights, elite monster fights, treasure pickups, random events, rest camps, or merchant squares. Fights are as they sound, you battling against some monsters. Events can be any of the other squares and they can also end up being a random multiple choice scenario that can have any wild sorts of effects on your playthrough. Camps allow you to heal a portion of your health, power up any cards that you have, or use any camp augmentations that you may have gotten along the way, but you can only do one of these things. Merchants allow you to add cards to your deck, purchase potions, remove a card from your deck, or purchase artifacts. Chests give you a relic and elite monsters always drop a cheat giving you another relic. You proceed in this fashion with full fledged bosses popping up incrementally until you SLAY THE SPIRE!!! 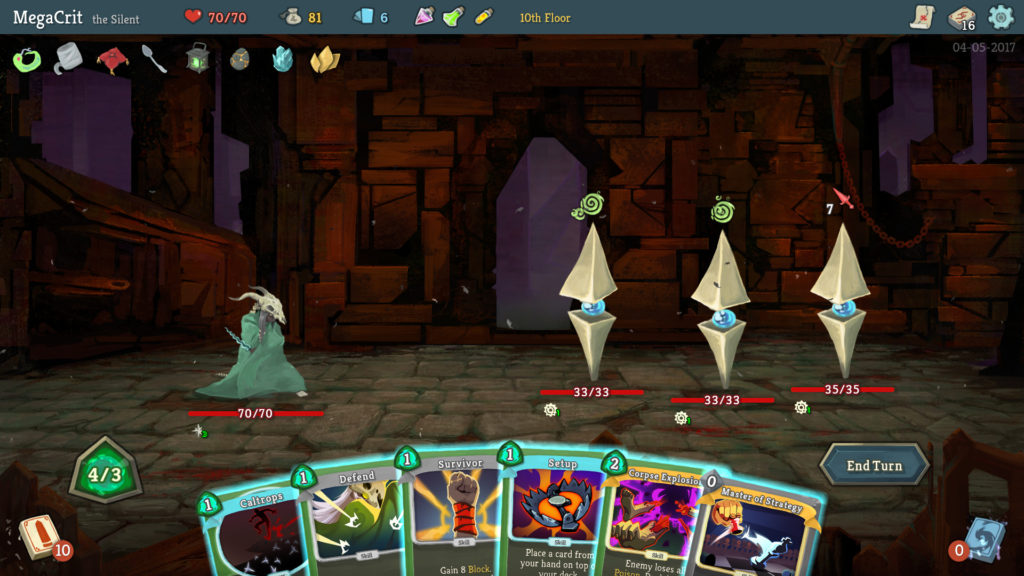 This is awkward, I decided to use a new order and categories when writing reviews like this, but this game doesn’t particularly have a story, all you know is that your character needs to SLAY THE SPIRE!!! 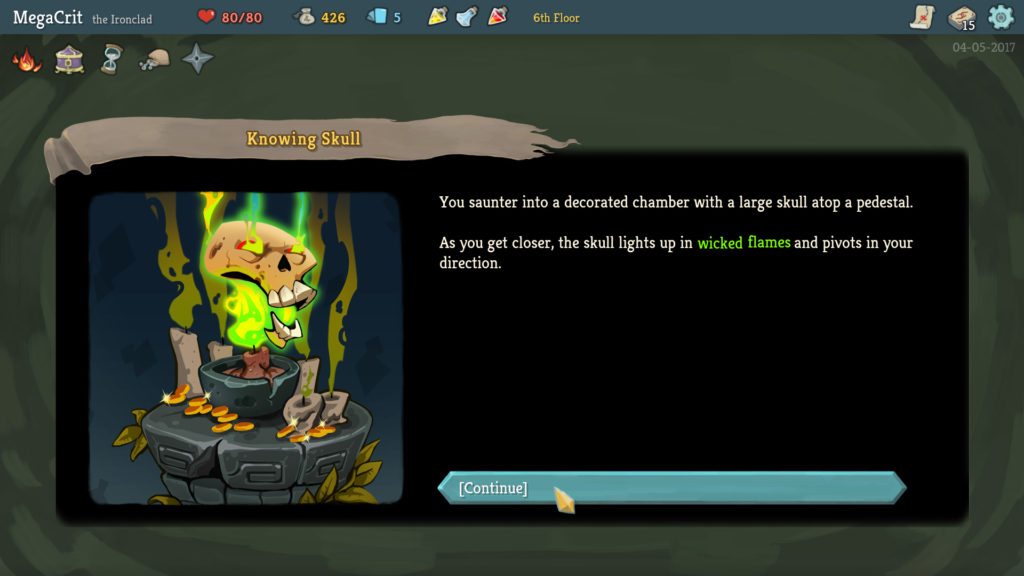 Of course, this is where Slay the Spire truly shines. This game itself is mostly centered around the battles and man, they really did it here. The battle system uses a combination of energy (base of 3 energy per turn), cards costing from 0 – X energy, potions with varying effects, and artifacts that have passive effects. Enemies in this game state their “intentions” which is a vague way of hinting what they are about to do so that you can prepare a good counter strategy. These hints fall into a few different categories:

Every fight revolves around balancing the amount of damage you take, deal, and mitigate to be successful in this game. The card system means that all of your attacks and defenses determined by what cards you play. Both characters have a very unique style (one is a berserker, the other is a rogue) with even further substyles branching out. Acquiring cards means you will eventually have to specialize and not inflate your deck with cards that don’t synergize or you will be disadvantaged. Picking up synergistic cards will have the potential to lead to victory, but this game is still quite difficult sometimes. The gameplay is very rewarding, intuitive, difficult, and flexible. That’s about the best you can get to be quite honest. I personally prefer the rogue character but had success playing it as a defensive poisoner and as an aggressive disabler. As more characters become available (one more upon release and maybe more after), we can all get the type of playstyle that we truly desire into this game. 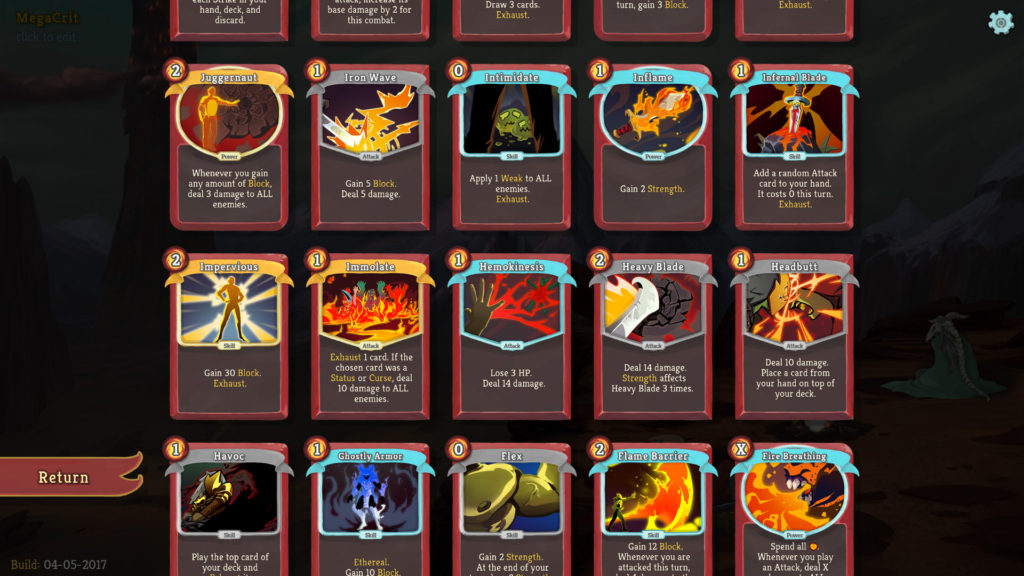 My Final Factor on Slay the Spire is a 9/10. This game offers a unique playstyle that allows players to customize their heroes in many fashions and still be successful as long as they’re good. The multifaceted customization is probably the best part of this game bar none. I first beat the game as a defensive poisoning rogue but still found success as a tank berserker, all in berserker, and as an immobilizing nuke rogue. I also love the fact that this game is punishing. Dicking around or not trying can lead to you wiping on random mobs for no reason at all aside from you playing like a shithead. My only legitimate complaint about this game is that the story is non-existent. I came up on Final Fantasy and Chrono Trigger so I do care about stories, but this goddamn gameplay is so engaging that it makes it very easy to play for hours on end without even realizing there isn’t a story being told to be honest. Slay the Spire is currently still Early Access and only $15.99 but prices are likely to rise on full release as they always do but that doesn’t affect people that buy it before release. I think any RPG or roguelite fan should instacop this one, no questions asked.