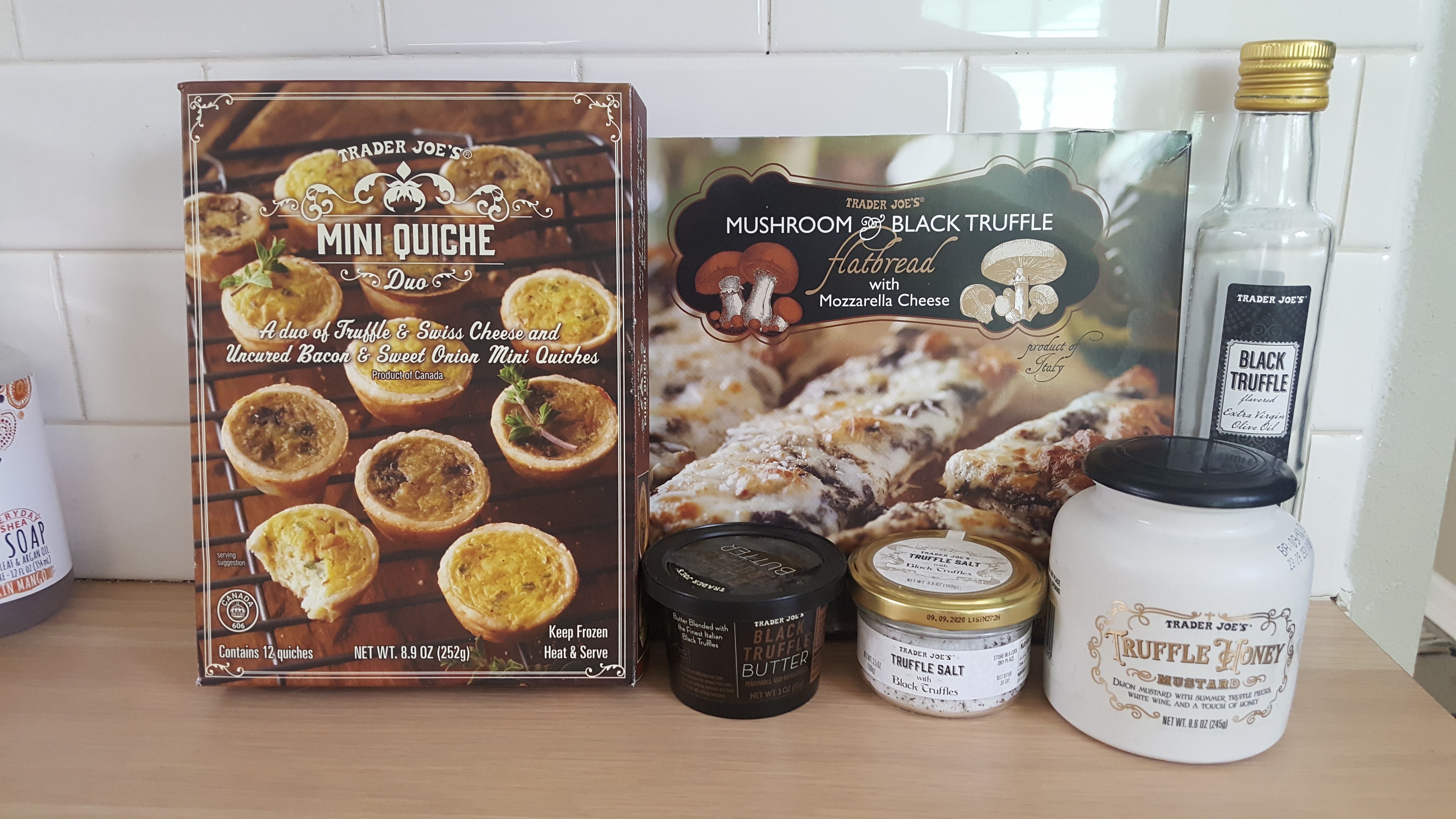 Another year, another winter, another restocking of black truffle enhanced products at Trader Joe’s. A Trader Joe’s was recently built in one of the suburbs and I definitely frequent there, it’s a weekly trip. While their product selection is always solid and nicely sourced, winter brings along my personal seasonal items that are themed with black truffles. As you can see in my featured image, I picked up five truffle products:

As an avid mustard fan, this one was easily my favorite. The truffle essence is accompanied by the subtle sweetness of the honey and the sharpness of the mustard. The container itself is also a really cool novelty. It’s actually made of stone and comes with this little plunger style top that you push down to seal the container. While I continue to enjoy this spread, I will warn you to use this product sparingly. The first time I used it, I slathered a good amount on a hotdog bun and topped it with a chicken and bacon sausage. It was, overpowering to say the least. You can see the flecks of black truffles in the mustard itself but this sauce is extremely potent. I thought I’d made a mistake initially, but the second go round, I cut it with some non-fat greek yogurt which was great for spreading on my sausage and the creaminess of the yogurt really took away the necessity of cheese which I normally find mandatory.

I read about this one in the fearless flyer before Trader Joe’s updated their stock with the winter products and I was beyond hyped for it. Hype quickly became disappointment, not because this product is bad, but because my local Trader Joe’s had ran out of stock. After crying like I child, I looked for it again this week and found it restocked so I ended up getting three of them. Totally worth it. I didn’t actually pay attention to the sourcing of the butter itself (I’m a bougie Kerrygold loyalist) but it is also very delicious. Smooth silky butter is accented by the rich black truffles. I simply spread a bit on their French Baguette and have it as an accompaniment to a meal.

I actually got this last year and im unsure if it is still sold this year. Like all truffle oil, this doesn’t actually contain truffles but contains truffle essence much akin to La Croix and it’s flavors. They use their California Estate olive oil which is potent enough but the truffle essence adds a nice extra punch to it. It’s great on mild salads but I sometimes use with some garlic to make pasta with a massive kick.

These things are simply great. They are frozen so you may want to pass if that’s not your thing but the melding of black truffles with Swiss cheese is amazing. These are great as a meal if as a side to a larger dish. My only gripe with this product is that it comes as one half of a duo, the other being Bacon and Swiss which staves off vegetarians. Though both are delicious, I feel that they’d be better sold as stand alone products for better flexibility.

This product is available year round as far as I know, it’s in the frozen section with all of the pizza style items. I grab this one every so often and I think I got it this time because I was in truffle mode. It is good, but you do have to take a bit of care when preparing it. I cook it on a baking sheet so that it actually stays soft. The directions call for it to be placed directly on the oven rack which causes the flatbread to get too hard in my opinion. The flavors are great here, they chose a mild cheese so that the boldness of the truffles could really shine through and the cremini mushrooms add another layer of flavor.

Notably absent from my local Trader Joe’s was the Truffle Macaroni and cheese. This is one of my all time favorite frozen meals from the grocery store. They use cavatappi pasta instead of macaroni and add a truffle infused bechemel to give a rich and creamy sauce. I’ve seen some sources that say it still exists so I hope o see it this weekend.