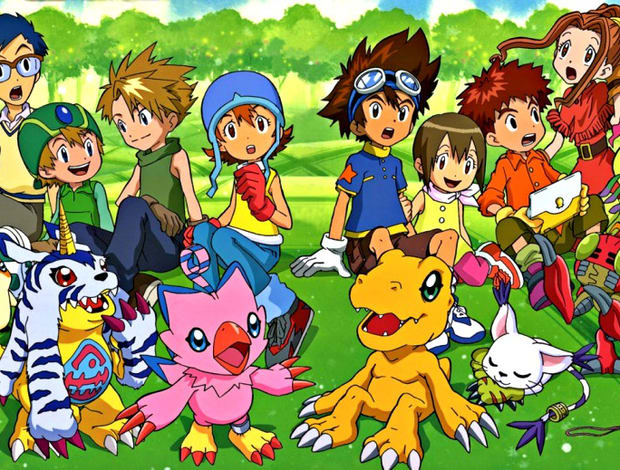 Sleuthing through the archives of Crunchy Roll and the Netflix anime section usually brings about new adventures for me to enjoy whether they be extremely popular shows or some sleeper hits that no one knew existed. This particular day after watching the last episode of Attack on Titan, Season 2, I happened upon an old favorite of mine. It has been almost two decades since I originally watch Digimon Adventure 01 and 02. I remember being in awe of the Adventures of Agumon, Veemon, and the digidestined across two full seasons. But was it really good? My girlfriend was out of town for 6 weeks so this was a perfect time for me to binge watch over 200 episodes of Digimon (I also binged on season 3 and 4 but that’s for another time).

Both seasons of this show starts off randomly enough, a group of kids get transported to the digital world for some inexplicable reason other than they are destined to save the world. As with most anime, the season divided into discernible arcs. The first arc finds seven kids being transported to the digital world where they discover their partners.

After wandering around for a bit, they chance upon the work of Devimon, their first antagonist and his black gears turning normally peaceful Digimon into aggressive adversaries. Devimon is eventually defeated and then Etemon reveals himself and his Dark Network to the children. Etemon is an “ultimate” level digimon which is one step in digivolution further than the kid’s digimon are capable of. The digidestined find tags and crests that Devimon was supposed to keep from them. Tai, the spiky haired, goggle headed protagonist (a common trope in this series) manages to get Greymon to digivolve again into MetalGreymon and destroy Etemon.

The surge of power sends him back to the real world briefly where he questions his purpose in the digital world. He eventually comes to his senses and returns after a battle with Ogremon in the real world. However, he returns to a fractured group that were struggling to find him. After many trials and tribulations caused by the group searching for Tai, Myotismon reveals himself as the new enemy and has a grand plan to get to the real world and subsequently take it over.

The group tries to prevent Myotismon from entering the real world, but fail and end up stuck in the Digital World. They manage to get back to the real world with some help from old man Gennai and also see a few more of their digimon digivolve to the ultimate level along the way. The gang stops the evil plot of Myotismon with the help of the 8th child who turns out to be Tai’s little sister Kari and Gatomon who happens to be her new partner.

Myotismon revives in an even further digivolved form that easily disposes of all of the children’s ultimate level digimon. Some obscure prophecy leads to Angemon and Angewoman shooting Tai and Matt with light arrows that let Agumon and Gabumon digivolved to the Mega level. A tough battle follows, but of course the kids prevail and the digital world is finally safe. Or is it?

The Digital World mysteriously appears in the sky and everyone has a bad feeling. Due to a, wrinkle in time, have you, time passes much faster in the digital world. While the gang spent all that time trying to stop Myotismon, evil had grasped the Digital World. Short version, 4 Mega Level Digimon warped the digital world to their desire. The gang comes back thinking the Mega level WarGreymon and MetalGarurumon can stop them but they get tossed. Etemon and Leomon randomly come back as Mega level for a bit and both of them get waxed. Eventually the leader of the Mega Digimon known as the Dark Masters has to fight the gang and eventually loses to Patamon for some reason. The souls of Digimon that didn’t get the chance to digivolve converge into a being known as Apocalypmon. He copies attacks but loses in 2 episodes. A heartfelt goodbye is given and everything is right in the world.

Did you notice how tired I got during that synopsis? It was reflective of how I really felt about the series.

I will preface this by saying that I am a character man. I like strong characters or at least characters that change in a fashion that end up better than what they started. This is one area that this series loses extremely hard. Out of a total of roughly 25 main characters, only about 5 of them have actual memorable personalities. The characters I really felt close to were Tentomon, Gatomon, Agumon, Gabumon, and Tai. 4 of these characters are Digimon but Tai is really the most memorable kid even though he isn’t a particularly strong character outside of Agumon being a fucking beast.

The Dark Masters were pretty interesting as characters, but they didn’t really have the ample time to evolve properly and just ended up as bad guys. Piedmon did stand out but he wasn’t even enough to be all that memorable. Then with a cast of mostly flat characters, the series sort of decides to end abruptly with no real rhyme or reason to Apocalymon and no back story to the Dark Masters. No good characters after so many potential stand outs is extremely disappointing. The whole series ends up being a subpar middle school drama that happens to have random monsters.

Stylistically, this series was really good. The artwork of the humans and Digimon was really solid and I felt it stayed true to the heart of what Digimon actually were. The Digimon themselves were all sorts of cool different designs with ample attention to detail from claws, to fangs, and even veins in some of the more muscular Digimon. The only downside to the animation is that the same special attacks had the same animation recycled throughout the series and the digivolution cutscenses that seemed to take forever.

Overall I would say the art and animation was really good aside form the battling. The Rookie forms were cute and full of charm and the higher levels were appropriate for their purposes.

In conclusion, this series was bad. Like kinda childhood crushingly bad. The only upside was the art of the Digimon and to be honest, I’m probably biased since I love monster series so much.

The plot takes far too long to ramp up properly and the only thing to entertain you until it does are recycled attack animations and middle school drama. I can’t realistically recommend this series in good faith unless you’re a huge monster fan such as myself, or you plan on watch in Digimon Adventure Tri which is the second followup with this set of digidestined. If you don’t fit into one of those molds, give this one the ole skipperooni.